I remember going to an orthopedic doctor for a pinched nerve about 35 years ago and telling him that, without warning, I felt an excruciating pain in my neck, like someone had stabbed me with an ice pick.  To my surprise, he told me that my perception of my pinched nerve coming about suddenly was an illusion.

The doctor went on to explain that what really happens when you get a pinched nerve is that inflammation increases over a period of time — sort of like a seismic buildup to an earthquake — then, without warning, it manifests itself as a pinched nerve.  My doctor’s explanation made sense to me, so much so that I often find myself applying it to all sorts of non-medical situations.

Which brings me to today and the 50th anniversary of Woodstock, a historic gathering that shocked the conscience of establishment America.  Woodstock was not an event that happened spontaneously, with 500,000 hippies just happening to show up at the same time at a remote farm in Bethel, New York.  Nor did Jimi Hendrix, Janis Joplin, or the Grateful Dead decide on the spur of the moment to make the trip to Bethel. 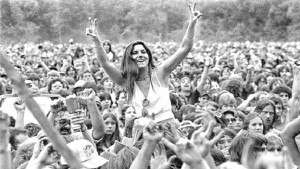 Metaphorically speaking, Woodstock was a cultural pinched nerve that had been building up over a long period of time as America’s moral foundation was crumbling.  The only question was when it would make its appearance.  The date turned out to be August 15, 1969.

The Twin Catalysts of Woodstock:  Marxism and Relativism

Marxism.  The groundwork for Woodstock was laid as far back as Karl Marx and his infamous work, The Communist Manifesto.  (Frederick Engels, Marx’s wealthy benefactor, was a contributor to the work.)  When communism actually began is subject to debate, but it undoubtedly goes back thousands of years, with signs of its being embraced by Neanderthals.  Marx, however, represents a de facto starting point for modern-day communism.

(When I use the term communism, it’s meant to include such euphemisms as socialism, progressivism, liberalism, collectivism, and any other ideology that promotes redistribution of wealth and draconian government control of human, economic, and production resources.)

Think of Marx’s attacks on Western institutions and values — things like family, religion, and individualism — as the earliest signs of inflammation in Western civilization’s nervous system.  And think of Woodstock as the point in time when the inflammation manifested itself as a giant pinched nerve for America.  If American exceptionalism reached its pinnacle in 1955 (which I believe it did), Woodstock served as the unofficial start of unbridled American decadence and decay.

Karl Marx’s ideas got their first real-life test in 1917 when the Bolsheviks overthrew Russian Tsar Nicholas II (Nicholas Romanov) and executed him, his wife, and their five children.  The barbaric executions of the royal family should have left no doubt in anyone’s mind about how communism would be imposed on future generations in other countries.

Which was predictable, because no well-informed populace accepts communism willingly.  The only way people will submit to sharing their possessions and giving government total control over their lives is through the use of force.

One of the most influential advocates of Marxism was Italian philosopher Antonio Gramsci, leader of the Communist Party of Italy, who is generally credited with being “the godfather of cultural Marxism.”  Gramsci became famous for his writings from prison after Mussolini incarcerated him.

Unlike violent revolutionaries like Lenin, Mao, and Castro, Gramsci favored the long game — gradual, stealth revolution over a long period of time — to bring about communism.  He believed this could be accomplished through communist infiltration of a country’s institutions, by influencing intellectuals, teachers, media professionals, publishers, politicians, even judges.

His disciple, Rudi Dutschke, referred to this approach as “the long march through the institutions.”  In other words, change the ideology of the elite class and you change the governing system by default.

Since Gramsci, many Radical Leftists have adopted his strategy, and over the past 50 years they have succeeded in gaining control of America’s culture by planting Marxists in public schools and universities, churches, government, and all segments of entertainment and sports.  An occasional Republican administration may slow them down now and then, but the long march of Marxism never ceases.  The Radical Left is superb at playing the long game.

Relativism.  The other catalyst for the decadence and decay that led up to Woodstock was the popularization of relativism, a philosophy promoted by 18th century Scottish philosopher David Hume, who is generally referred to as “the father of moral relativism.”

Relativists are nihilists in that they deny the possibility of an objective basis for truth.  They believe nothing is certain, that everything is relative.  In other words, truth is what you choose to make it.  Thus, there are no constraints on anyone’s behavior.

Maybe that code of conduct wasn’t always fair, but it wasn’t confusing, either.  Everyone understood the rules.  Then along came the hippie crowd of the sixties preaching the religion of relativism.  Nothing, they insisted, is certain; everything is relative.  As a result, in just a few decades America, once the moral leader of the world, succeeded in trashing its longstanding certitudes.

A generally accepted code of conduct is anathema to the relativist, which is why he considers activities and ideas such as “free love,” drug-induced highs, and over-the-top gutter language to be cool.  Above all, since a belief in God is constraining, the belief in a godless universe is nothing short of liberating to him.

Timothy Leary, the high priest of LSD advocacy, summed it up succinctly with his mantra:  “Turn on, tune in, drop out.”  Translation:  Screw a generally accepted code of conduct.  Let it all hang out.  And at Woodstock, let it all hang out they did.  Lots of sex with random partners, lots of foul language, lots of drugs, lots of loud noises masquerading as music, and a dearth of personal hygiene.

Officially, only two people died at Woodstock, but that figure is misleading.  Though it’s impossible to prove, the symbolic legacy of Woodstock is that it may very well have contributed to the deaths of millions of young people via drugs and suicide over the past 50 years.

13 responses to “From Marx to Woodstock to Insanity”