The dictionary defines bigotry as “stubborn and complete intolerance of any creed, belief, or opinion that differs from one’s own.”  These traits perfectly describe today’s progressives.  Even so, progressives have a constitutionally protected right to be intolerant of anything or anybody, so long as they do not use violence against those with whom they disagree.

It logically and morally follows that conservatives, independents, and apolitical folks also have a constitutionally protected right to be intolerant, with the same caveat that they do not have a right to engage in violence against those with whom they disagree.  Regardless of one’s politics, thought and speech deserve freedom, while violence deserves nothing less than incarceration.  To all civilized people of goodwill, there is no compromise on either of these points.

That said, here’s a news flash for Radical Leftists:  Bigotry has existed in all civilizations and at all times throughout recorded history.  It may be an uncomfortable reality for some to accept, but it is true nonetheless.  And even though civilized people of every ethnicity abhor bigotry, if they are truly civilized, they acknowledge the right of every individual to think and say whatever he so chooses, so long as he does not commit aggression against others.

Unfortunately, people who are not civilized do not agree with this premise.  Saturated with self-righteousness, they preach love in an effort to signal their moral superiority.  Droning on and on about love may seem like a harmless activity until you realize that the kind of love many people preach is actually forced love.

Love in its purest form is one of the most admirable human traits, while forced love is a malevolent, hypocritical concept.  How do you differentiate between genuine love and forced love?  The simplest way is to pay close attention to a person’s actions as opposed to his words.  When you do so, you will usually find that those who are the most vocal about the need for more love among the people of the world are more often than not the same individuals who are the most vicious toward those with differing opinions.

Progressives have been preaching love since time immemorial, while simultaneously trying to exterminate those who disagree with them.  Whatever genuine love they may have once held in their hearts, it always seems to have been replaced with hatred.  What brings about this transformation is a subject for professional psychiatrists to study, so I won’t take up space offering my own psychological analysis.

However, one psychiatrist whose work on this subject I highly recommend is Dr. Lyle H. Rossiter, author of The Liberal Mind.  Oversimplified, Rossiter believes that most leftists are people who, for one reason or another, have not evolved through the natural maturation process.  As a result of their stunted mental growth, they are incapable of accepting the imperfections of life, which in turn results in anger and a tendency to engage in childlike tantrums. 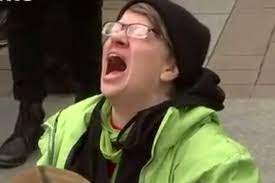 We all remember the hilarious photo of the woman on her knees shrieking “No!” at the top of her lungs when it was announced that Donald Trump had been elected president.  While this poor soul became a worldwide meme and provided endless laughs for millions of people, the psychosis she displayed is not a laughing matter.  It is the epitome of a child’s brain trapped in an adult’s body.

Such a person is ripe to become what Eric Hoffer described as a “true believer” in his book of the same name.  To a true believer, the nature of the cause is of little importance.  What matters most to him is being a part of something that can give meaning to his trivial life.

When people are devoid of rational thoughts and incapable of accepting the tribulations of an imperfect world, they become easy prey for revolutionary leaders who excel at doublespeak.  Doublespeak isn’t just some fictional idea created by George Orwell.  It is relentlessly practiced by real-life radical leaders who realize that their ideas would be rejected if presented in their unfiltered form.

Plain and simple, the purpose of doublespeak is to create an artificial truth that is at odds with reality.  In Orwell’s 1984, the Party’s three main slogans are:  War is Peace, Freedom is Slavery, Ignorance is Strength.  In today’s world, I would suggest a fourth slogan:  Force is love.

Forced love is a byproduct of self-righteousness.  If one has convinced himself that he is morally superior to those whose beliefs are diametrically opposed to his own, it becomes easy for him to conclude that it is his moral duty to force them to change their beliefs.  Further, since his own beliefs are righteous, people who disagree with him must be evil by default.  And if someone is evil, it’s also his moral duty to destroy them if they refuse to change.

Now that you know how much Democrats love you, perhaps you can understand why they fight so hard to resist voter integrity laws.  Their intentions are noble, of course.  The seemingly malevolent things they do are just to protect you from those hateful people driving pickup trucks and flying American flags.  After all, if Democrats are prevented from cheating in elections, those insurrectionist savages might actually win, in which case Democrats would be prevented from protecting you with their forced love.

Their message is clear:  Because they are smarter and more virtuous than you, Democrats resent having to campaign for your vote.  Their love for you is so great that they are determined to eliminate elections altogether so they can spend more time focusing on helping you.

Trust me, when you come to understand all this, you’ll sleep much better at night knowing how much you are loved by the very people for whom you instinctively once had the most distrust.  Now, just relax and keep reminding yourself that ignorance is strength and force is love.  It takes a while for it to sink in, but, once it does, your life will be much less complicated.