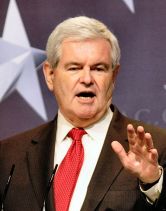 Newt Gingrich served as the 58th Speaker of the United States House of Representatives from 1995 to 1999 and represented Georgia’s 6th Congressional District from 1979 to 1999. He is the author of twenty-five books and a frequent guest on Fox News. He is a candidate for the 2012 Republican presidential nomination.