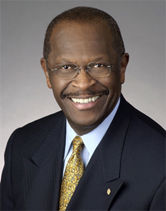 Herman Cain is an American business executive and was a Republican candidate for the presidential nomination in 2012. He served as vice president of the Pillsbury Company, regional vice-president of Burger King, CEO of Godfather’s Pizza, and CEO of the National Restaurant Association.