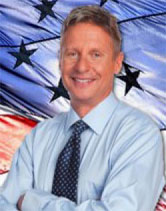 Gary Johnson was the Republican Governor of New Mexico from 1994-2003 and is currently a candidate for the 2012 Republican presidential nomination. A believer in the libertarian ideology, he formed the OUR America Initiative, which promotes civil liberties.